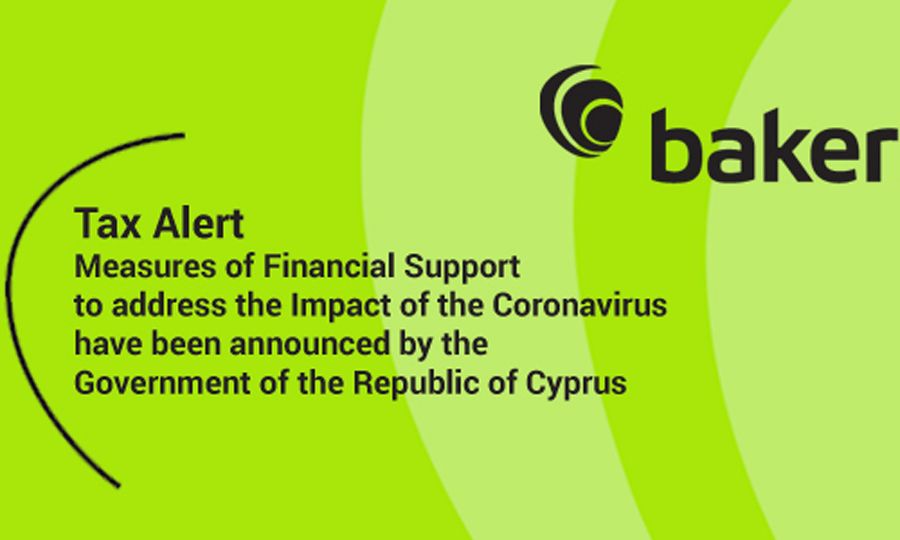 Measures of Financial Support to address the Impact of the Coronavirus have been announced by the Government of the Republic of Cyprus
17 MARCH 2020 - 13:08

Press Release:
Measures of Financial Support to address the Impact of the Coronavirus have been announced by the Government of the Republic of Cyprus

The President of the Republic of Cyprus and the Ministers of Finance, Labor, Welfare and Social Security and Health announced at a press conference on Sunday 15 March 2020, a series of measures to address the effects of coronavirus.

The measures which have been announced are summarized below. It should be noted that a number of clarifications are expected on many of these measures within the next few days, thus a new alert will be issued.

A. SUPPORT OF BUSINESSES, ENHANCE OF LIQUIDITY AND STIMULATION OF INTERNAL CONSUMPTION

1. Temporary suspension for two months of the obligation to pay VAT in order to provide businesses with liquidity

Arrangements will be made for the settlement of these debts gradually until 11 November 2020, without the imposition of any penalties or interest.

The VAT tax periods which are covered have not been explicitly mentioned, but it is expected to be the quarter ended on 28 February 2020 and the quarter ending on 31 March 2020, with the VAT due to be paid by 10 April 2020 and 10 May 2020 respectively.

The standard VAT rate is temporarily reduced from 19% to 17% for a two-month period and the reduced VAT rate is reduced from 9% to 7% for a period of three and a half months, provided that the relevant legislation is approved by the House of Representatives.

For the duration of the emergency, special arrangements will be made for those who are entitled to the scheme for settlement of taxes in arrears, based on which scheme their tax liabilities until the year 2015 will be gradually paid in installments.

A subsidy of €750 will be provided to cover the costs of students attending overseas universities who will not return to Cyprus during the Easter holiday.

6. No payment of the additional GESY contribution which was scheduled for 31 March 2020

The additional GESY contribution from employers, employees and the government is postponed for two months. The time schedule for the implementation of Phase 2 of the GESY is not affected.

The European Central Bank (“ECB”) has already considered measures for the support of bank lending. In the context of the new measures, the Cypriot financial institutions will be able to obtain liquidity from the Eurosystem on substantially favourable terms. The measures decided by the ECB concern, amongst others, the release of capital stocks, which for the Cypriot systemic banks are estimated by the Central Bank of Cyprus (“CBC”) in excess of €1.3 billion. In addition, the CBC is considering further local measures which will be announced at a later stage.

B. SUPPORT AND PROTECTION OF EMPLOYEES AND VULNERABLE GROUPS

1. Granting of “Special Leave” to parents working in the private sector for the care of children up to 15 years old (up to the third grade of gymnasium) due to suspension of attendance at public and private schools, nursery and child care centres.

For the “special leave”, which can last up to 4 weeks, an allowance will be granted to a aprent with a salary of up to €2.500, as follows:

In the case of single parent families, the rate of payment of the allowance varies between 70% and 50% respectively.
The “special leave” will be granted to one of the two parents and if one parent receives the said leave, the other cannot receive the same leave at the same time. Also, if one parent works / receives an unemployment benefit / participates in a Work Suspension Plan and the other does not, the working parent is not entitled to the “special leave”, unless the parent who is not working has himself or herself been infected with the coronavirus or is hospitalized or is a disabled person or is a person under compulsory control.

The said special leave to parents for child care will be granted if the nature of their work (i) does not permit teleworking or (ii) work from home or flexible working hours and (iii) if there is no internal assistance The “special leave” will be granted in consultation with the employer upon request.

There are a number of criteria and conditions which should be met for the above “special leave” allowance.

A Business Suspension Plan is implemented for those businesses which it has been decided to suspend their operations and for those that will continue to operate with a turnover reduction of more than 25% in order to avoid the dismissal of employees and at the same time the affected employees to receive an unemployment allowance for as long as the business is suspended.

The businesses which are subject to suspension from 6 am on 16 March 2020 and for a period of 4 weeks are the following:

Hotels suspend operations until 30 April 2020. The hotels can continue their operations for a period of 6 days, in order to serve their existing customers.

Essential retail trade services relating to the health and well-being of the community remain open, such as:

Retailers that do not fall into the category of suspension of their work should not have more than five employees in the workplace.

For all private, public and wider public service enterprises which serve the public (banks, public utility payment offices etc), the presence of people in the service area will not exceed one person per 8 square meters of usable space, including employees.

3. Business Support Plan for small businesses that employ up to 5 people, provided that they retain their employees at work and their turnover has been reduced by more than 25%

The Plan provides for a subsidy of 70% of employee salaries. The terms and conditions of the Scheme will be announced shortly.

There are a number of other measures that have been taken and are not detailed in this alert, such as: